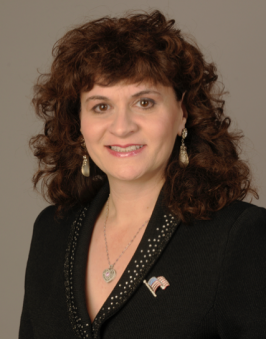 Dr. Karen A. Panetta is the Dean for Graduate Education in the Tufts University School of Engineering, a Professor in the Department of Electrical & Computer Engineering and an Adjunct Professor of Computer Science and Adjunct Professor of Mechanical Engineering. Dr. Panetta was the 2019 President of IEEE-HKN (Eta-Kappa, Nu) and is the Editor-in-Chief of the award-winning IEEE Women in Engineering Magazine and a contributor to Forbes. She is the Vice-President of IEEE Systems, Man and Cybernetics Society, a NASA JOVE Fellow and Past-Vice-President of IEEE-USA.  Prior to joining the Tufts faculty, Dr. Panetta was a Principal Engineer for Digital Equipment Corporation. Karen is a world recognized champion for developing diversity and inclusion initiatives. She has numerous awards including the NSF Presidential (PAESMEM) Award, awarded by U.S. President Barack Obama and received the inaugural IEEE Ethical Practices Award.

Karen is an IEEE Fellow, AAIA Fellow, NASA JOVE Fellow and Digital Equipment Corporation (DEC), Engineers into Education Fellow. She has several awards for outstanding research, teaching and mentoring and outreach activities.  In 2011, President Obama awarded Karen the nation’s highest award for Engineering, Science and Mathematics Education and Mentoring. Other awards include the Norm Augustine Award from the National Academies of Engineering and Science, American Association of Engineering Societies, Women of Vision Award from the Anita Borg Institute, the inaugural recipient of the IEEE Ethical Practices Award, New England Engineers Week Leadership Award, Harriet B. Rigas Award for outstanding female Educator. Dr. Panetta is the recipient of several National Science Foundation Research Grants, including the NSF CAREER Award and a $1,000,000 S-STEM grant for diversity and inclusion. Dr. Panetta’s intellectual property, now known as digital twins, has been adapted across several industries and has won several awards from NASA for Outstanding Research and Research Excellence.  On September 11, 2001, Karen’s high-speed multiplexor design was deployed to New York City to help successfully restore communications.

Karen has been recognized as the only educator in Massachusetts for engineering technology innovation by Mass High Tech Magazine. While at DEC, she co-invented the first CPU Digital Twin. Her patented underwater imaging measures and algorithms are utilized by several companies and organizations for under water search and rescue and ocean exploration operations. Her other inventions, including her parametric logarithmic image processing operators and image quality measures, quantitatively emulate human vision. These are the first of their kind to enable computer vision applications to automatically assess image quality like a human observer, while enhancing imagery for human perception. Her methods have been adapted across the biomedical, safety and security and agricultural application fields, including for Cancer detection, homeland security, fire protection, food safety and self-driving vehicles.  For Artificial Intelligence (AI) detection and classification systems, her methods ensure optimal image quality data to reduce misclassifications due to invariant image quality without the need for a human evaluator

Her impactful technical contributions are complimented by her lifetime of commitment to education and using technology to benefit humanitarian efforts.  She designed the App-E-Feat humanitarian challenge for engineers in conjunction with the Clinton Global Initiative and IEEE-USA, for which she received a commendation from President Bill Clinton. She has personally conducted engineering outreach activities to over 85,000 children, parents and educators through the International acclaimed Nerd Girls Program and is currently the host of the “Nerd Girl Nation” show, an interview series of STEM women role models. Karen was STEM Advisor to Her Excellency, Joyce Banda, during her Presidency as the leader of Malawi and STEM adviser to  U.S. Ambassador to Slovenia, Linda Blanchard.