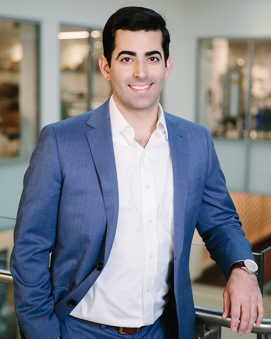 Prior to joining FL79, Dr. Boghigian was one of the first employees at Indigo Agriculture, a privately held agricultural technology company based in Charlestown, MA, where he helped build the company from a 5+ person organization to one with more than 1,000 employees that has raised over $1 billion dollars in venture capital financing, and is regarded as one of the most valuable private agricultural technology startups. Across seven years at Indigo, Dr. Boghigian held multiple leadership roles in research and development functions, as well as Project Management, Product Management, and Business Development and Licensing. Prior to Indigo, he was a Scientist at Axcella, which he joined after graduating from Tufts.

Dr. Brett Boghigian came to the Medford campus in September 2003 to study chemical engineering, meeting now Dean ad interim Kyongbum Lee as his undergraduate advisor. He earned his BS in chemical engineering with a minor in philosophy in May 2007. He then completed a PhD in chemical engineering in three years with 14 publications. He has remained closely connected to the university and to the School of Engineering over the years, now serving on the advisory board of the Department of Chemical and Biological Engineering.

His research and work span the fields of biochemical engineering, microbiology, computational biology, and protein science, with applications in pharmaceuticals, nutrition, and agriculture. He published his first research at the age of 19 while an intern at PerkinElmer. He then joined Stern Family Professor in Engineering and Distinguished University Professor David Kaplan’s lab studying silk protein assembly and structure. During the latter half of his undergraduate and graduate studies, he merged the complimentary expertise of Professor Blaine Pfeifer and Dean ad interim Kyongbum Lee, leading to his dissertation titled “Multi-scale engineering and modeling of heterologous natural product biosynthesis in Escherichia coli.”