Senior Priya Misner first became interested in autonomous vehicles when she began seeing Waymo's self-driving cars in her Bay Area neighborhood as a high school student. "I was equally fascinated and confused by them," she recalls now. "How did they work? Was this safe?"

Misner explored those questions and more in her time as a mechanical engineering major at Tufts. Her senior project laid the groundwork for developing a virtual reality autonomous driving simulator that could be modified by users who don’t have a background in coding. The project had a big vision: an open-source driving simulator, based in virtual reality, that would allow researchers to create and edit driving simulations by simply dragging and dropping in the Unity interface. 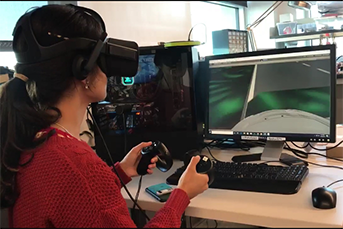 Misner testing the simulation in a VR headset.

The research started as a project in ME94, an independent undergraduate research course. "I worked with a truly fantastic team of four other students and couldn't have gotten to the point I did in the research without them," says Misner, expressing gratitude to Korri Lampedusa, E21, Julie Yeung, A21, Stephanie Bentley, E22, and Caleb Jeanniton, E22. Misner studied in Tufts' Human Factors Engineering program and worked on her senior project with her advisors, Professor of the Practice James Intriligator (Department of Mechanical Engineering) and Lecturer Hal Miller-Jacobs (Department of Psychology), who both teach in the program.

Misner’s path after graduation will continue on the foundation she built at Tufts. She recently received a Fulbright-Nehru Student Research Fellowship to explore whether interactive virtual reality driving simulations are an effective way to increase drivers’ awareness of and desire to follow road laws in Delhi, India. There are two key components to the work: promoting drivers’ awareness of basic road laws, and changing drivers’ perceptions of the importance of following the laws. 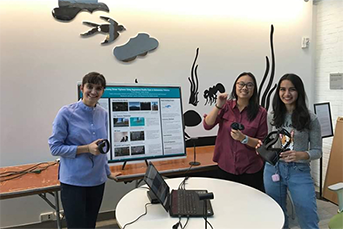 Misner will work alongside the Anticipatory Driving and Accident Prevention Training (ADAPT) certificate program run by SaveLIFE Foundation, a nonprofit organization dedicated to improving road safety across India. “I will be observing ongoing trainings, consulting with SaveLIFE’s researchers, and interviewing drivers of heavy commercial vehicles on their experience driving,” she explains. “Based on these conversations and working with the ADAPT program, virtual reality scenarios will be developed for scenarios where there is a large disconnect between drivers’ knowledge and their adherence to the law” – for example, speeding in residential areas, texting while driving, and running red lights.

Once those scenarios have been identified, Misner will collaborate with the WEAVE Lab at the Indrapastha Institute of Information Technology to create interactive virtual reality driving simulations that will run in Google Cardboard, using a smartphone as the display. While travel restrictions raised by COVID-19 will delay the start date of her fellowship, Misner looks forward to getting to work.

Misner hopes to help create a future where autonomous driving makes road fatalities a thing of the past. During her junior year, a close friend was in a car accident. "The senselessness of the accident and how it could have been prevented has really driven me to find ways to make our roads safer," she says.